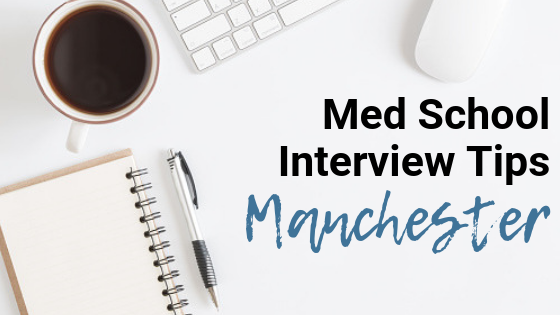 The Manchester medicine interview process is a seven-station multiple mini interview (MMI) format, and each station will be seven minutes long.

Preparing for your Manchester medicine interview:

1. Understand which stations may come up in the MMI

Manchester make it very clear on their website that the Manchester medicine interview is not a test of your academic knowledge. Instead, the interview will explore the non-academic criteria, such as:

Your ability to communicate will be examined and indeed, your experiences in a caring role will be of great interest. Make sure you are able to talk about your emotional responses to these experiences and what you have gained from them!

If you’re worried about ethical issues during the MMI, don’t panic – in these debates Manchester state that “candidates should be reassured that neither the interviewers nor The University of Manchester will take a position on any ethical issue.” The interviewers will be interested in how coherently you express the ethical dilemmas facing medical practitioners.

One of the more obvious questions that you may be asked is “Why do you want to be a doctor?” It is so easy to come up with a coached and practiced answer in your prep work for this question, but Manchester state that they will “seek evidence of the experiences that have influenced your decision to study medicine.”

Having an understanding of what the interview is testing will make your prep work so much easier!

2. Practising will help you get over your nerves

Being called to interview can be really scary and intimidating. However, the med school will appreciate that some candidates will be nervous! The interviews are conducted in as relaxed an environment as possible.

Practising your interview technique beforehand will go a long way to help with your nerves – if you’ve practised debating ethical issues aloud or voicing your motivation to study medicine before, it will feel much more natural on the day.

Before you are even called to interview, the screening process operated by the medicine admissions team will make sure that everyone who receives an interview invitation has academic potential.

Manchester want you to do well because they know that you are academically able. Allow this thought to fill you with confidence! Knowing this, the purpose of the interview is just to get to know how you think.

Finally! Your interview is over and you can go and relax.

Following your interview, the interviewers will complete various assessment forms and the task of collating the information to reach a decision is carried out later.

You will receive formal notification of the decision directly through UCAS Track, however you won’t know the decision on the day of your interview. Manchester say that they aim to give out all final decisions by the end of March each year.

If, however, you are rejected, the best thing that you can do is request feedback on your application. This will allow you to know where you went wrong so that, if you have to reapply to med schools next year, you can improve your interview technique.

Hopefully, my top three tips will help you prepare for your upcoming interview. Good luck!

Prepare for your Manchester medicine interview with our MMI Circuit!