State of the NHS

This is your guide to the current state of the NHS - from ambulance wait times and the backlog, to the care sector and availability of GPs.

State of the NHS

NHS ChallengesAmbulancesBacklogCareDoctors & DentistsInterview TipsInterview Prep
When you’re discussing hot topics at your Medical School interview, it’s essential that you understand the current state of the NHS. This is your guide to the key points that you should really be aware of.

The Health Secretary, Thérèse Coffey, has articulated an ‘ABCD’ vision for reforms to the national health service. The letters stand for Ambulances, Backlogs, Care, Doctors and Dentists.

Whether this survives as a policy platform, or programme for health sector reform, is currently an open question. However, it is a useful framing device to look in more detail at challenges facing the NHS.

The main measure of performance for ambulances is their response time from the point when someone has dialled the emergency services. The request for an ambulance is then sorted into one of four categories, depending on the urgency of the situation. Each category has its own target for ideal response time.

The current performance of ambulances against the response targets is mixed, at best.

As of April/May 2022, while Category 1 calls see an average response time of 8:36 minutes (only 1:36 mins above the target average wait), Category 2 calls see an average wait of 40 minutes. This is far above the target average of 18 minutes. The same issue exists with Category 3 calls, with the average response time of an ambulance attending a Category 3 call being 2 hours 9 minutes. The target states that 90% of ambulances should have arrived within 2 hours.

Naturally, this has an impact on patient safety. It is also worth keeping in mind that even though responses to Category 1 calls were only 1:36 mins above the target, these are the most serious calls that the NHS receives, i.e. calls where minutes and seconds will really count.

The increase in wait times is having a knock-on impact on provision across the board, with specific cases highlighted by the BBC including a London ambulance taking 70 minutes to respond to a suspected heart attack and a patient in Stoke dying after waiting 8 hours for an ambulance.

Get the most popular interview prep, trusted by 1000s every year

There are several reasons why ambulance response targets have been missed.

As a means of addressing this, the government has allocated £150 million to specifically address ambulance waiting times and has given NHS workers a 3% pay rise in order to incentivise retention. For context, the £150 million figure represents 0.1% of the overall NHS budget of around £150 billion.

One factor leading to longer response times for ambulance services is the backlog that the NHS is dealing with across all areas of healthcare provision.

This has hit a number of areas.

BMA (British Medical Association) analysis of waiting times has also found that of these people:

The BMA are also worried about the ‘hidden backlog’. This refers to people who in normal times would have presented themselves for treatment but chose not to – or had referrals cancelled.

Analysis from the Nuffield Trust shows that for less serious visits to A&E departments, the 4-hour wait target from admissions to transfer or discharge has been largely met. In the third quarter of 2021/22, 96% of Category 2 and 3 (minor injuries) visitors to A&E were dealt with within the target 4 hours.

However, for Category 1 attendees (the most serious), only 60% of patients were referred or discharged within the 4-hour target. This has an impact on the ability of ambulances to discharge patients, so it is a further cause of delays to ambulance response times.

Additional analysis from the BMA has shown that the number of people waiting for more than 12 hours in emergency departments has increased by 14%, and is now 88 times as high as it was in August 2019.

Attendance to emergency departments fell during the pandemic, which helped the NHS to meet certain targets during this time. However, as of August 2022, only 75% of cancer patients referred by a GP had seen a consultant within the target time and 62% of patients had started treatment.

Demand on the health service has evidently spiked since the end of the pandemic. However, attendance has only returned to pre-pandemic levels rather than exceeding it, and the number of patients waiting more than 12 hours for treatment in emergency rooms has risen significantly. 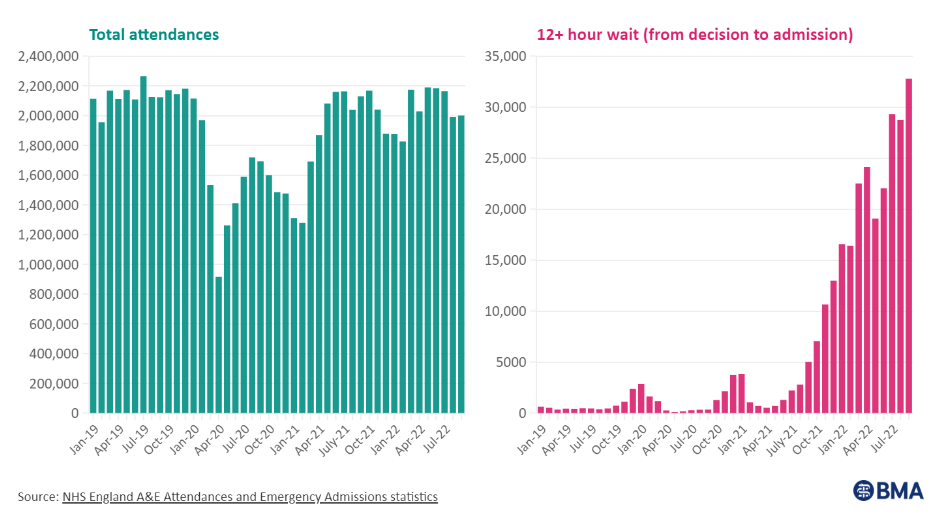 While the backlog can be blamed in part on the Covid pandemic, there must also be other factors responsible for the increase in wait times – such as the severity of the conditions that patients are presenting with, longer ambulance response times, and changes in wider community health provision.

Save 20% on Interview Prep

The care sector is a crucial component of the NHS. It includes all roles that support people who require specialised assistance to live their daily lives. This can include the elderly, young families and those with mental illnesses, or people who suffer from addictions such as drug or alcohol dependency.

As such, the care sector plays an important role in ensuring that people with either physical or mental health issues are supported in the community before they require the support of hospitals, GPs or emergency services.

There are a number of challenges currently facing the care sector, but the most pressing is the number of vacancies that have gone unfilled. A recent Skills for Care study found that the number of available posts in the care sector increased by 0.3% in 2021/22, while the number of applications for those roles decreased by 3%. This has led to 165,000 posts going vacant, which is 10.7% of the available posts. This is the highest number on record – higher than the amount of vacant positions in the NHS at 8% or in the wider economy at 4%.

With fewer members of care staff available, the level of support inevitably decreases. This can manifest as potential emergency admissions, but it can also lead to non-professional care, for example by family members. In 2022, 4.5 million more people have become unpaid carers since the pandemic began, bringing the total number of unpaid carers to 13.6 million people.

There are a number of reasons why there is a staff shortage in the care sector.

In 2019, 2020 and 2021, the rise in pay for the average care sector worker did not increase relative to increases in the national living wage. Given the challenges of working in the care sector, this would explain the sluggish recruitment.

To attract more staff, any pay increase would need to offset the fact that care workers are, on average, not paid as well as comparable jobs in sectors that are often perceived to be far less demanding. For example, the average hourly wage for a care sector worker in 2022 is £9.50. This compares well to kitchen and catering assistants (£8.92), but not to retail assistants (£9.64).

Leaders in the care sector cite the relatively low pay and demanding work as a reason why it is difficult for them to fill posts.

Another relevant issue is the impact of Brexit on immigration regulations. In January 2021, it became impossible for someone from the EU to gain work in the UK in the care sector. This naturally led to a dramatic rise in vacancies in the sector which had previously relied on EU workers to provide labour.

From February 2022, care workers were added onto a shortage occupation list. This means that, as long as the role pays more than £20,480 per year, care workers can be recruited from the EU. Combined with a boost to international recruitment more generally, there is an increasing trend of care workers coming to the UK to find work.

In the above chart, it is worth noting that 10% of international starters are from the EU.

While there has been progress in raising the number of Medical School students in the last few years, and also progress towards the government’s 2019 manifesto commitment to recruit 50,000 more nurses by 2024/25, there has been less progress in ensuring access to GP appointments and Dentists.

A report from the King’s Fund has found that the government’s target of 6,000 more GPs by 2024/25 is likely to be missed, as well as the commitment to fund 26,000 more healthcare workers to ease pressure on GPs.

A June 2022 analysis by the Health Foundation found that there is a current shortage of 4,200 fully qualified GPs in England. This is projected to increase to 8,800 by 2030. This shortage has meant difficulties in patients seeing their GP in a timely manner, and has therefore likely had an impact on the number of patients presenting to emergency wards.

An even more severe shortage is affecting the availability of Dentists. A 2022 BBC investigation found that 9 in 10 NHS dental practices were not taking on new adult patients and that 8 in 10 are not taking on child patients. The problem was worst in the south-west of England, Yorkshire and the Humber and the North West, where 98% of practices were not accepting new adult NHS patients.

If you study Medicine in the UK, it is likely that you will go on to work for the NHS after graduating. Therefore it’s important that how understand how the NHS works and the issues it currently has.

Medical School interviewers will expect you to have some knowledge of the realities of working in the NHS and the challenges that Doctor face.

You can find over 100 example interview questions and answer guides in our Interview Question Bank.

Explore all of our Doctor-created interview prep in one place.

Stand out with our one-day Medical School Interview Course - delivered by Doctors. Get proven strategies and a real mock interview.

The most popular way to prepare! Our Doctor-created MMI Prep Course is trusted by thousands of students every year.

Explore all of our Doctor-created interview prep in one place.

Stand out with our one-day Medical School Interview Course - delivered by Doctors. Get proven strategies and a real mock interview.

The most popular way to prepare! Our Doctor-created MMI Prep Course is trusted by thousands of students every year.