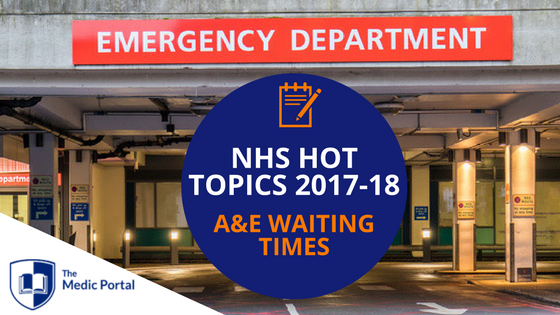 Welcome to our new series on NHS Hot Topics 2017-18! These blogs will cover one recent piece of medical news from 2017-18 in detail.

Accident & Emergency (A&E), also known as the Emergency Department (ED), is a department within a hospital that is dedicated to treating life-threatening emergencies. Unlike other departments in the hospital, this is a walk-in service, which anyone can attend at any time. Patients may attend A&E themselves, or call an ambulance to take them there if they are unable to travel.

On arrival, patients are initially assessed to determine how serious their condition is – this is called “triaging”. This allows patients with more life-threatening conditions to be attended to first. This, along with the fact that the number of patients using the service naturally outweighs the number of staff, means that most patients should expect to wait before being seen.

Why has the A&E department been in the news?

In 2004, the government introduced a target for A&Es to either admit, transfer or discharge 98% of patients within four hours. This initially led to an improvement in waiting times. Unfortunately, the current strains on the NHS have meant that this is no longer the case. The target has been relaxed to 95%, but this is still not being achieved; new figures show that the number waiting more than four hours has grown by 557% in the last 7 years. Lack of funding and understaffing are cited as key reasons for the growing waiting times, as well as increasingly inappropriate use of the A&E service by the general population.

There is general unrest amongst both patients and staff about the way A&E services have been running in recent times. Even when A&E staff have assessed patients and are ready to admit them, they are often prevented from doing so by a lack of available beds in the hospital. This means that patients remain in A&E despite this not being the most appropriate place for them, and others, who need to be assessed, cannot be, due to lack of available space.

What are the issues?

Clearly, increased waiting times impact patients, whose treatment may be delayed as a result. However, an increased focus on achieving targets is not necessarily the solution, and in fact may be dangerous, as staff will be encouraged to make quick decisions rather than focusing on what is the most appropriate course of action. Furthermore, staff who are overworked are less likely to provide an optimal standard of care. This also impacts on their own well-being, which is further to the detriment of patient care.

Inappropriate use of services is also a huge factor. There have been many NHS awareness campaigns recently, trying to inform the general population about what health complaints constitute an “emergency”, and need seeing to in A&E. There has also been a focus on making the population aware of what can be dealt with more appropriately with other services, such as minor injury units, walk-in clinics, or even pharmacies.

What might I be asked about A&E waiting times?

A&E waiting times are a very topical issue and you may be asked to discuss it in an interview. The key points to be aware of, as described in this blog, are:

It is worth considering how well you can answer the following questions:

Want to get clued up on other hot topics? Read more from our series below: