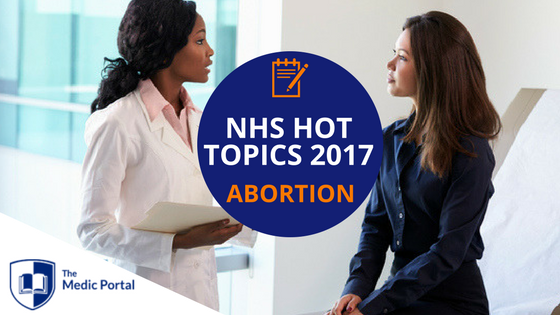 Welcome to our new series on NHS Hot Topics 2017! These blogs will cover one recent piece of medical news or ethical issues surrounding a topic in detail.

Why do I need to understand this topic?

1 in 3 women will have an abortion. Therefore, it is highly likely you will come across this procedure in your professional medical career.

This topic is an ethical dilemma and is a common topic at interview – your interviewers will want to see that you can formulate arguments for both sides. When answering this question in an interview it is also important to refer to the four pillars of ethics (Autonomy, Non-Maleficence, Justice, and Beneficence).

What is an Abortion?

An abortion is defined as the medical termination of a pregnancy. A pregnancy can be terminated by taking medication or by having a surgical procedure. Reasons why abortions are carried out may include: failure of birth control, pregnancy from rape, unwanted pregnancy, fetal abnormality or the inability to support the child due to a mental condition.

As a prospective medical student, it is important that you know a little bit about the legislation about abortions as it is something you could be asked about in an interview.

In England, Wales and Scotland abortions are normally only carried out up until 24 weeks gestation (calculated from the first day of your last period). In some circumstances, the abortion can occur after 24 weeks, for example, if the mother’s life is at risk.

Some Points For and Against Abortion

This is no means an exhaustive table, but it gives you a few points for and against abortion to help formulate your interview answer.

Are there any recent news articles on Abortion?

A recent topic which has been discussed regarding abortion is allowing women to take the abortion pill at home. It has been initiated in Scotland and it is hoped that it will spread to other parts of the UK. Many top obstetricians are in support of this motion– to allow women to feel more comfortable and to provide safer care.

Another debatable topic is the 24-week limit. Many still believe that is should be shortened while others believe it is the right length of time.

A good documentary to watch recently was on BBC TWO called the Abortion on Trial. It allows you to see real stories from people who have all had abortions and their points, for and against abortion.

What are potential questions I could be asked at interview about abortion?

How do I structure my answer?

This is something that almost all students struggle with. My advice would be to start off with:

Take home message: there is no right or wrong answer- just remember to give both sides of the argument and refer to the four pillars of ethics.

Want to get clued up on other hot topics? Read more from our series below:

From the impact of Brexit on healthcare to the Charlie Gard case, read all about this year's hot topics here!