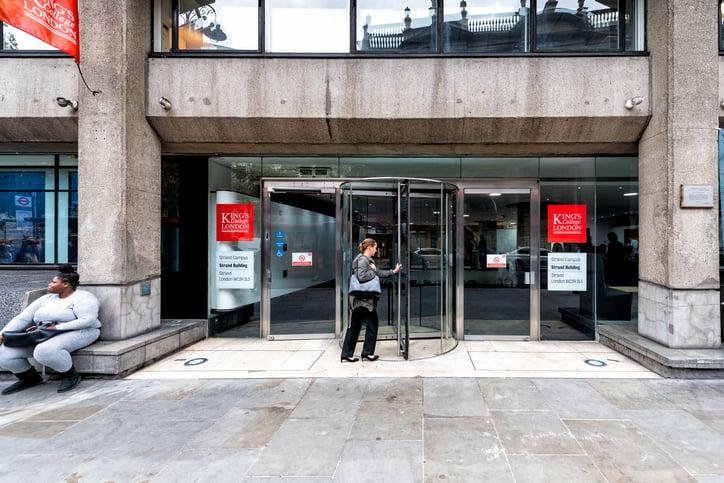 King’s College London is universally renowned for its academic excellence. Home to some of the oldest teaching hospitals in the country, KCL has an incredibly diverse student body.

We spoke to current KCL medical student, Afra, about what life is really like studying medicine at King’s. Read on to find out!

Why did you choose Medicine at King’s College London?

There were several reasons! I was accepted into a couple of London universities but I didn’t pick one until the very last day. Ultimately, King’s won because it is a multi-disciplinary university.

I’ve always enjoyed humanities subjects and I heard there were opportunities to take modules in languages, the history of medicine and medical literature. I also wanted to be surrounded by a mix of people, rather than scientists alone.

Having said that, I liked that Guy’s campus was separated from the main campus and the medics had their own halls and societies to create a strong medic-community. I was also very charmed by Guy’s campus, which is very pretty and in a great part of London.

What’s the best thing about life at King’s College London?

King’s is a big medical school. It’s actually the largest student healthcare body in Europe. This was a huge positive for me because it meant that there were so many opportunities to make new friends!

I have a wide variety of interests and, with over 2000 medical students, there were good odds of finding people with some overlap. In the six years I’ve been at King’s I’ve developed new interests and I’ve never struggled to find new people to share these with!

Larger universities also tend to be really well-funded, which means they have the money to invest in extra-curricular activities. This can be anything from internships to summers spent abroad! I try my best to make use of this and take every opportunity I can!

Academically, I am really interested in public health and so applied for a conference in New York, during which time I visited Yale University and met one of my global health heroes.

Outside of classes I have recently gained an interest in hiking and expeditions, so I joined the Wilderness Medicine Society, which organise a wonderful trip every year. I’ve now been twice, once in Slovenia and once in Spain – both generously sponsored by King’s.

Lots of universities have similar schemes, so if you like the sound of this I would recommend researching what’s available before you apply.

It’s exciting but also expensive. It’s great because there are so many things to do and, even as a Londoner, I hadn’t done a lot of them before starting university.

During my first few years, I spent ample amounts of time walking along the South Bank, having drinks at The Shard and Boris biking at midnight. It’s amazing to make London your home and explore the very best of it as part of your everyday life.

It’s also expensive. This first occurred to me when I moved out of London for a placement and paid £2.50 for a cinema ticket, compared to my usual £12.45. Many students need a part-time job and you should account for this when thinking about your workload because it can be tiring.

I lived out for three years and found paying my rent manageable with the help of my student loan and a job but I knew friends who live in smaller cities and didn’t have the same issue.

What do I wish I’d known before applying to study Medicine at King’s College London?

As a large medical school, all 2000 students can’t be trained in one place. I mistakenly thought I would be at either St. Thomas’, Guys or King’s College Hospitals but I spent my third year in Canterbury, my fourth in Margate and I’m finishing off my fifth year in Hastings.

King’s actually has hospitals all over Kent and East Sussex, so you could be spending significant amount of times outside of London. This isn’t necessarily a bad thing, it was lovely to go for seaside runs, explore the countryside and experience life outside of a city, but it was a surprise when I first found out I wouldn’t be spending all my time in London.

It’s worth pointing out that you can indicate a preference which King’s will try to account for. You are usually shipped off with your ‘clinical partner’, an individual who quickly becomes your friend, partner and family all in one, so you will never be alone during placements.

What should I expect from the Medicine curriculum at King’s College London?

King’s has recently introduced a new curriculum for all incoming students. I switched from the old to the new in fourth year and, having experienced both, can safely say the new curriculum is really well designed and should make for a very pleasant learning experience.

There have been two big changes;

Overall King’s really is a wonderful place to study medicine. It has an excellent balance between leafy campus and city, traditional and integrated and social and academic.

Want to prepare early for medical school interviews? Book a space on our MMI Practice Circuit!

Top 5 Tips for Studying Your A-Levels

Six Ways to be Productive Whilst Waiting for Medical School Offers