3 Tips for an Imperial Medicine Interview 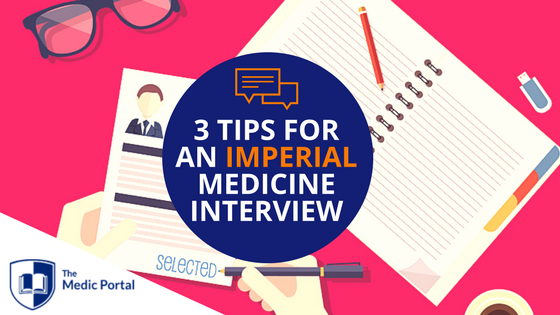 Looking for top tips for an Imperial medicine interview? You’ve come to the right place!

Applying to Medicine for 2018 entry? Book a space on our newly announced Interview Courses!

1. Know your stuff about Imperial

Whether it’s knowing that they will have you do a BSc as well as your MBBS, or knowing which societies you’re interested in, a bit of extra research about life at Imperial is always needed. Be prepared to justify everything in your Imperial medicine interview – so if they ask you why you’ve chosen a university where the BSc is built in, you have an answer ready. They may ask why you want to come to a big London university instead of a smaller medical school, or what it is that makes Imperial different to the other London schools – and that’s why you need to have looked around to know what to say!

Consider what makes Imperial different and know why that’s important to you. Whether it’s having patient contact from the start of the course, doing the BSc in the 4th year or studying in a STEM-centric university, be prepared to justify your choices with Imperial-specific information. The interviewers want to know that you haven’t just chosen Imperial on the basis of its reputation or a recommendation from your mum. If you can research Imperial and answer questions on it, then you can do the same for medicine – so prove it!

2. Know your personal statement inside out

If you’ve said you’re a confident person, have some examples ready to use for that in your Imperial medicine interview – and try and make them as recent as possible. If you’ve mentioned work experience, be ready to talk about it – and not just what you did, but what you learnt and why it influenced your choice towards medicine and Imperial. Perhaps you had some experience in a laboratory and it made you want a course that focuses more on scientific principles and gives you more of a chance to do research throughout.

If you’ve mentioned a book or paper in your statement, try and read over it again before because they might pick up on it – and if you haven’t seen it in a while, it’s much more difficult to talk about. Try and read up on some reviews and further work that’s come from the book – it’s a good way to show you already have some critical appraisal skills essential for work in medicine.

Interviewers have seen masses of personal statements and can work out what’s likely to be over exaggerated – so they will ask about certain things to work out just how sincere you are. Be yourself and know what you’ve written so that you don’t contradict yourself, and have confidence that if your statement was enough to get you an interview, then it’s enough to get you a place as well.

3. Try and be specific in your Imperial medicine interview

In your Imperial medicine interview, they will try and ask you broad questions to give you room to talk about what you want to – and to give you room to think. They want to know how you interpret questions, so trust yourself and know that they’ll redirect you if they think you’ve gone off topic. Allow yourself to give specific examples – being too broad means you may come off too vaguely and they won’t be able to suss out who you are. Anyone can give them a generic answer they learnt from the web, but only you can give the specifics of your life and how it would fit into Imperial.

It’s a great way of showing you’ve really thought through what the next six years of your life will entail, and that you’ve really considered just what a life in medicine involves. If you’ve got specific examples ready for broad questions then you can be prepared for just about anything- and that’ll help you relax, which is a really good way to show you’re able to handle the stress medical school can bring.

They’re not expecting you to have oodles of knowledge about every little thing, but the more interest you can show, the better. If you’ve read that Imperial has a renowned music society and you’re a cellist, you can show you’ve looked into Imperial. If you once helped an older lady with dementia and noticed the healthcare staff referring to a care plan made years in advance of her dementia, you can show that you notice the subtleties of medicine. And if they ask you a specific, difficult question and you don’t know the answer? You don’t know it, and that’s fine. They don’t expect you to know everything, and they’re there to help guide you to an answer.

Need one-to-one help? Our doctor-trained Medicine Tutors are ready to help you boost your UCAT and BMAT scores, nail your Interviews and get you into medical school.

3 Tips for an Oxford Medicine Interview

Need one-to-one help? Our doctor-trained Medicine Tutors are ready to help you boost your UCAT and BMAT scores, nail your Interviews and get you into medical school.