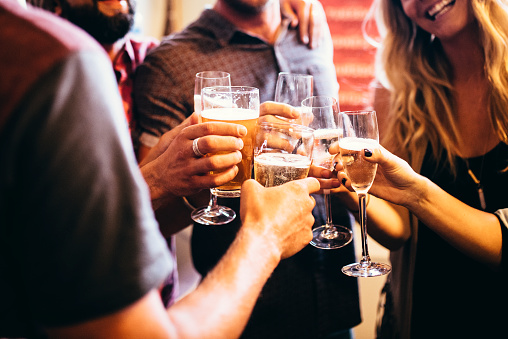 This week, we will discuss the following topics: new research on alcohol safety, guidelines for reducing antibiotic usage and a new weight loss drug found to have promising results.

Study confirms that there is no safe alcohol limit

A global study has confirmed that there is no safe alcohol limit. The trial considered the largest range of factors to date and included data from around the world. The findings demonstrate that although moderate drinking may convey some protection against heart disease, the risk of other diseases including cancer outweighs any potential benefit.

The risk also appears to increase exponentially with amount of alcohol consumed. Although the risks associated with one drink a day are small, they quickly rise with increased consumption.

It is interesting to consider that a substance now proven to only cause harm is still legal in the UK, especially when compared to other illicit drugs which are actually objectively less harmful. The reasons for this may have much to do with the fact that alcohol is so integral to the lifestyles of the general public.

Attempts have previously been made worldwide to criminalise alcohol use; consider the Prohibition in the United States, which ultimately proved unsuccessful mainly due to the lack of public support for it. Those who had previously been law-abiding citizens were now willing to break the law to continue their lifestyle as had previously been acceptable.

Coupled with increased police corruption, this led to the general idea that all laws could be ignored without consequence, and the amendment eventually had to be repealed. This would be an interesting discussion point in an interview if asked to debate the ethical implications of criminalising alcohol, or decriminalising other recreational drugs.

Question to think about: what are the arguments for and against decriminalisation of recreational drugs? Read about more NHS hot topics here!

National Institute of Health and Care Excellence (NICE) guidelines now include recommendations to use honey and over the counter medications as a first-line treatment for those with a cough. This comes with increased awareness that the majority of coughs are known to be viral and therefore require no antibiotics for their treatment.

However, many patients believe that they need antibiotics for their coughs and are often unhappy if their GP tells them that they are not needed. This leads to a lot of pressure on GPs to prescribe unnecessary antibiotics, which is contributing to the problem of antibiotic resistance.

This makes true bacterial infections harder to treat. Evidence has shown that up to half of GPs prescribe antibiotics for viral coughs. It is hoped that this new guidance will encourage GPs to recommend symptomatic relief for patients and reduce antibiotic usage.

One of the roles a doctor, particularly in primary care, is “health promotion”. This is the idea that patients can be empowered to take control over their health if they are given the correct advice and educated in the right way.

These new guidelines can be considered a form of health promotion, as patients who are educated about the use of honey and over the counter medications, can avoid unnecessary trips to the doctor and improve their own health.

Question to think about: can you think of any other examples of health promotion? Read more about antibiotic resistance here!

A new drug called “lorcaserin”, which suppresses appetite and aids weight loss, has had promising results in a recent trial. Adults taking lorcaserin in the trial were more likely to lose 5-10% of their body weight over 40 moths, with no increased risk of heart valve complications, which was the concern about previous weight loss drugs.

Patients taking this drug also had slightly lowered diabetes risk. However, an accurate side effect profile has not yet been established. The drug is not yet licenced for use in the UK, although it has been available in America for several years.

Although time and resources are being put towards completing such trials, there is some debate about whether weight loss should be funded by the NHS at all. Some argue that the high prevalence of obesity is due to social inequality, and therefore it is only fair that the NHS funds treatment for this.

However, this is tackling the consequences of inequality, rather than the cause of inequality, and may be considered an inefficient use of funding. Tackling the inequalities themselves may be a more long term solution, albeit a much more difficult one.

It is also worth being aware that some consider medical weight loss strategies to be a “medicalisation” – in other words, turning “normal” human conditions into a medical problem.

Question to think about: what are the arguments for and against spending NHS money on helping patients to lose weight? Read about the “sugar tax” here and its role in curbing childhood obesity!