This is Going to Hurt: a Q&A with Adam Kay 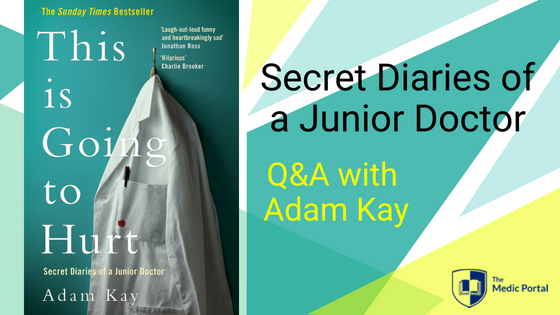 The Medic Portal speaks to writer and comedian Adam Kay about his best-selling book, This is Going to Hurt, his advice to aspiring medics and what it’s really like to be a junior doctor…

What’s the journey to becoming a junior doctor? Read our page on What Does a Doctor Do? below.

See the steps to becoming a junior doctor

TMP: You’ve stated that This is Going to Hurt started from the notes you took while working as a junior doctor. At what point did you consider trying to sculpt them into a book?

Adam Kay: Although I didn’t quite realise it at the time, I was quite clearly writing down the funny things that happened at work as a form of therapy – looking for the shards of light amongst the dark. At the time I just thought I was some kind of low-rent David Sedaris, accruing a supply of anecdotes to upset dinner party guests with. It had never really occurred to me while I was a doctor, or for a long time afterwards, that they might one day become a book.

At the time of the strikes I decided to take a show up the Edinburgh Fringe where I could talk about the realities of being a doctor, and a large part of that show involved me revisiting my diaries. It still didn’t occur to me they might one day be a book, until a publisher came up to me after one of the shows and asked if I’d be interested. A couple of years and a bunch of chopped-down trees later and here we are.

The process itself was a bit of a nightmare – choosing the diary entries that put together would add up to a fair representation of being a junior doctor and getting the balance right between the funny and the sad, the high octane and the mundane, life at work and the impact on life at home. Plus making sure I didn’t go to prison by including anything I shouldn’t have. My deadline was quite tight of only a few months, so I had to devote quite a few hours a day to the process. Luckily I’m not a doctor anymore so I have a few hours a day spare…

Read our Step-by-Step Guide to Medicine>>

TMP: As well as This is Going to Hurt being humorous, you also write about the less glamorous aspects of medicine. Was it a conscious decision to give a realistic insight into life as a junior doctor to those wanting to work in medicine?

Adam Kay: It was crucial to me and to what I hoped to achieve that I presented an unvarnished portrayal of life as a doctor. I wanted any junior doctor to be able to pick the book up and say to their friends and family that it’s a fair portrayal of what it means to do that job.

The very nature of medicine is that more bad things happen than good, and it was important for me not to shy away from that. The book is very much presented as a funny one – and it is, for the most part, but humour is often a good way of getting a more serious message across.

I suspect if the book had been entitled “A Harrowing Polemic About The State Of The NHS” then it might not have shifted as many copies, and I wouldn’t have been able to spread the message as widely.

TMP: You’ve said in interviews that you wanted to amplify the voices of junior doctors in This is Going to Hurt, especially in light of the contract disputes. Could you talk a little more about this?

Adam Kay: The government have an extremely loud voice – they can go on Marr and Peston and The Today Programme whenever they like, they can command huge opinion pieces in national papers.

Doctors often have such a quiet voice – understandably enough, they’re busy being doctors for a hundred hours a week. I found myself with the exciting opportunity of being able to bang the junior doctor gong from the rooftops, and it’s been utterly humbling to see the reaction it has had.

How much do you know about medical ethics? Take the quiz!

TMP: What advice would you give to students wanting to study medicine at university?

Adam Kay: Medicine is the best job in the world – nothing comes close to the privilege of being able to play that role in people’s lives. But, it’s a job to go into with both eyes absolutely wide open, and we shouldn’t pretend that the job is something it isn’t.

I guess my best advice (and not just for financial reasons…) is to read my book – if you still want to do it despite knowing some of the harsher truths, then it’s probably the job for you.

Which medical specialty would suit you? Take the quiz!

TMP: Have you had any memorable responses to This is Going to Hurt so far from aspiring medics?

Adam Kay: It’s very easy to get in touch with an author these days – be it via email, twitter or Facebook pages – and I receive dozens and dozens of messages every day, a lot of them from doctors and medical students.

One med student did offer to marry me, which I suppose was the most memorable (I declined – it would have annoyed my husband otherwise.)

TMP: Who is your favourite fictional medic – or medical TV show – and why?

Adam Kay: House. Hugh Laurie is an absolute hero of mine – and I think there’s a little bit of House in me…